The most successful week in club history was filled with action as all teams came home with the win. The A grade side extended their impressive win streak against a strong Scarborough side as the Stormers managed a great win against North Beach.

The wet conditions were a challenge for most sides, mostly the Dingoes who made the track out to Armadale only to be informed the opposing side only had 8 players for the game. Later on at the ground, the pirates were treated to a burnout gender reveal, creating the best photo of the year. 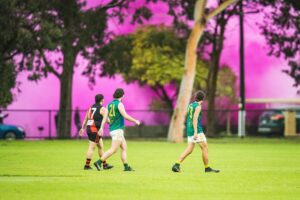 The league side continued their winning ways with a hard fought 33 point victory over Scarborough. The A Grade ladder is as close as it’s been in years with 2nd and 6th only separated by 6 points, this meant that the Round 15 fixture would be one of Uni’s most important wins.

The first quarter started really well for Uni, as we skipped away to a 3 goal lead halfway through the term. Leading goal kicker Leigh Kohlman started our day with a ridiculous set shot from 50 out on the junction as he nonchalantly slotted the goal into a strong breeze. Livewire Isaac Barton sparked the side with his usual pace and enthusiasm, whilst our midfield group worked hard to give us first use and drive the ball forward.

The second term Scarborough turned the momentum, kicking 2 quick goals to even the score early on. As has been the case in the last several weeks, the group showed calmness and maturity as they swung the game back into our favour, responding with quick goals of our own. The backline responded well after a minor blemish in the quarter and ensured we entered the main break with a 19 point lead.

In the second half, the game started to open up. Uni’s midfield group was working really well together, moving the ball with purpose and kicking the ball deep inside 50 for the forwards to score. Kohlmann and Barton were the main beneficiaries as they each kicked their third of the game. We entered the main break with a 28 point lead.

Uni was challenged to not let the intensity slip at ¾ time as Scarborough were capable of kicking goals quickly, as shown throughout the game. Our backline was up for the challenge with key pillars Ben Culloton, Tim O’Hara and Jye Harris being resolute in defence.

The highlight of the quarter was the goal of the year contender from wingman Ryan Murphy. New to the club this year, Murph decided to sell candy at the junction of the 50m arc and kick a goal from relatively nowhere, a piece of raw skill that drew applause from the 10 spectators that braved the conditions.

This victory has the league side sitting 4th on the ladder, equal with CBC and North Beach who’s percentage still remains ahead. With only 4 weeks left in the season (3 games and a bye) the team will be focused on securing a finals berth come September.

The Ressies run out under grey skies with one eye to the thick juicy clouds. Sure enough, the heavens opened within 1 a few minutes of the opening siren. The next 40 minutes of football were played in what can only be described as “torrential” conditions. The Uni side showed great toughness and discipline around the ball, getting their hands on the footy first more often than not, and tackling low and hard. A single rushed behind in our favour was agreed to be a good result going into the first break, given the slight breeze favouring Scarborough.

Conditions in the second term didn’t ease up at all, with Uni continuing to dominate the contest. A few opportunities resulted in valuable points, while the backline set up solidly behind the ball. It wasn’t until late in the second when Leighton Howard marked in the goal square to put through the first major of the day. We took a 9 point lead into the main break, which felt like a solid buffer given the conditions.

Despite the rain easing off, the conditions remained slippery and difficult in the second half. This resulted in an ongoing arm-wrestle, with much of the play being in the Scarborough forward-50 in the 3rd term. Full credit to the backline and midfielders, who tackled and scrapped for almost 20 straight minutes to hold the opposition scoreless.

The scrap continued throughout the 4th, with each rushed behind in our favour feeling like a small step towards securing the result. It wasn’t until Harry Donovan put through our second goal of the game late in the final term was the game sealed and delivered. In what was a bizarre spectacle at times, Uni managed to hold a strong Scarborough side scoreless, securing a much needed win with finals fast approaching.

Credit goes to the full side, with the game being a true team effort across the ground.

They say three is a lucky number and so UWA will be the most auspicious team in A grade after defeating North Beach on Saturday.

The win means UWA now have one hand on a third placed finish, guaranteeing them a second chance in finals if they win the next two games.

But the Stormers didn’t have things all their way, North Beach drawing level with the first goal of the final quarter.

It came after four consecutive UWA points, the Stormers threatening to run away with the game if not for inaccuracy which was punished by North Beach’s second major.

Their breakthrough sparked the Stormers’ most complete passage of play of the day.

First, the ball surged into the Tigers attack.

Then the Stormers won the ball from a defensive stoppage and surged it up towards the wing.

Second- gamer Sara Mohamed, then flew across a pack, threatening to reel in a one handed mark before gathering the ball on the bounce and sending it inside 50.

And then, Bec Lyons, who had compiled one of the games of her life, got on the end of a long ball inside 50, bouncing a ball towards and over the goal line.

It was enough to gift UWA victory, their sixth win in seven starts, and surge the Stormers into third spot on the ladder.

Steely defender Claudia Rowell was judged best on ground for a gutsy performance down back, overcoming a midweek bout of illness.

While Bella Zadnik kicked her first goal in Stormers colours, drifting forward from half back to take a crunching contested mark just beyond the goal square.

The Pirates were out in Armadale this week and came away with a 59 point win.

Despite starting off a little flat the Pirates started clicking into gear in the 2nd quarter as Rossco, Kettle, Tobussy and Jerk started to get on top through the middle. Jake ‘the canoe’ Just and Smally dominated up forward all day with tallies of 6 and 5 goals a mighty effort in the wet whilst Bilf and Hench looked dangerous at ground level. Hilux snr adapted well to playing in the ruck and continued to challenge Sando for slowest candy selling in the league.

It was a wet and slippery game and we were forced to win ugly in the end coming away with a valuable 4 points and percentage boost as the race to finals heats up. The Pirates are now in 4th and play top of the ladder Noranda at home next week.