See where each team sits with four rounds to go as the pointy end of the season approaches. With all teams in striking distance of the top five, we could be on track for a record-breaking season, attempting to have all nine teams qualify for finals for the first time.

4th Place – 36 points, 9 wins 5 losses 111.7%
After a 2-5 start to the season, the A-Grade side have been on a roll, winning their last seven games in a row to be in a commanding position going in to the finals. After the loss to Bassendean in round seven, the side have beaten every other team in the top 5 and now sit just one game behind second placed North Beach. The team come up against sixth placed Scarborough this weekend and will be looking to extend the win streak to 8 in a row.

Uni don’t play another top five side for the rest of the year and will need to rely on other results to improve the ladder position. Four wins and a significant percentage increase could see the side finish as high as second, banking a home final and double chance.

“You’re not obligated to win. You’re obligated to keep trying. To the best you can do everyday.” – Jason Mraz 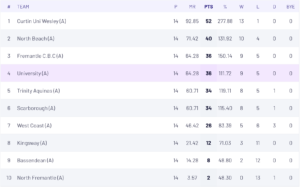 4th Place – 36 points, 9 wins 4 losses 182.54%
The Stormers are sitting in fourth place and have secured a finals spot, sitting 12 points clear of 5th places Kingsley. The top of the table is tight with North Beach ahead by two points thanks to a draw and Warnbro only a win ahead in second place. Due to the shorter Womens season (hopefully for the last year), the side only has three more home-and-away games left to play.

This weekend, the side take on third placed North Beach, a contest which will shape the finals draw and give the Stormers a good idea of where they sit in the pecking order. This is followed by another challenging game against Kingsley.

“Birds sing after a storm. Why shouldn’t we?” – Rose Fitzgerald Kennedy 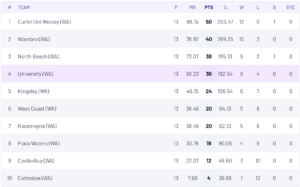 6th Place – 34 points, 8 wins 5 losses 1 draw 133.18%
The Poodles have been in fine form in recent weeks, culminating in a positive result against Kingsway and a desperately needed percentage boost. Despite the positive win-ledger, the side are languishing outside the top-five and are touch-and-go to qualify for finals. The equation is simple from here, win every game and the Ressies are likely to make finals. Drop a game and the Feral Bush Pigs will need to rely on the competition to see September action.

The Reserves face their biggest match of this season against second placed Scarborough in close to a do-or-die contest. Last time the two sides met, Scarborough prevailed in a 7-point thriller but Uni will go in to the contest with confidence after finding some recent form. 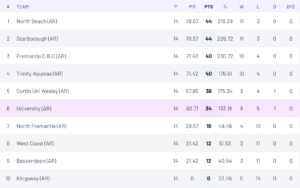 1st place – 54 points, 13 wins 0 losses 1 draw 264.83%
The Showtime colts remain the only undefeated side at the club, boasting a near-perfect record with four games to go for the regular season. The only slight blemish came in a draw to Curtin in Round three.

All attention turns to finals from here with the side looking to put in a serious conditioning block over the next 6 weeks to ensure the boys are fit and ready to go come September. With the week off in the first round of the finals all but secured, the A-Colts will be looking to peak at the right time and bring home the clubs first Phil Scott Colts Flag since 2018. 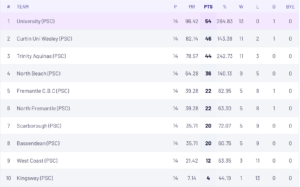 5th place –  28 points,  7 wins 7 losses 101.52%
The Pirates are sitting with an even ledger after a big win against Osbourne Park on the weekend. Just inside the top five, the side will need to secure at least three wins in the run home to secure their spot in finals.

Games against top four sides in Noranda, Forrestdale and North Fremantle will be a major challenge for the side with the latter in round 18 potentially deciding the sides fate in the finals. With some mature players returning and the end of the European Summer approaching, the Pirates will go in with confidence to each match.

“It’s funny that pirates were always going around searching for treasure, and they never realised that the real treasure was the fond memories they were creating.” ― Jack Handey 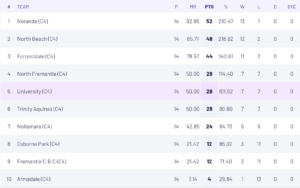 1st place –  52 points,  13 wins 1 loss  309.46%
The Mighty Dingoes are sitting pretty in first place and are finding form at the right time. For the first time in years, the side has been able to put a consistent side on the park each week and have enjoyed staying on the winners list for most of the year. Next week, the side are set to embark on the much anticipated trip to the most hospitable club in the league – Armadale. The side will welcome back a favourite this weekend, as Matt-in-a-hat returns from his WIWO exploits up North, boosting the sides finals aspirations.

The rest of the season sees the side only facing one other top-five side, as the Dingoes aim to finish the year on a high going in to an important September campaign.

“I got my lips chewed off by a dingo!” – David Letterman 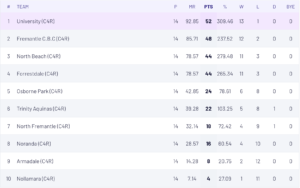 2nd place –  44 points,  11 wins 3 losses 226.04%
The Gulls are enjoying their season so far, sitting in second place, behind the Mozzies on percentage. Due to the strength of the colts program this year, it is great to see the side with such competition for spots and continuing to add to their win tally.

The side has a challenging run home with all games coming against teams in the top five. In a quirk of the fixtures, the Gulls take on Swan Valley twice in the run home. In subsequent weeks, the side will take on first placed Mosman Park and third placed Quinns District who are all locked on 44 points a piece. This stretch will be brutal and is perfect preparation for the exciting finals series ahead.

“Freedom can be forgotten in the repressive countries. To remember freedom, it will be enough to watch a happy seagull flying in the sky!”― Mehmet Murat ildan 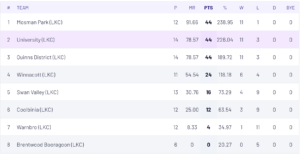 2nd place –  40 points,  10 wins 2 losses 205.06%
It has to be seen to be believed but the depth of talent in the colts program has resulted in a remarkable position for the club where the record across the teams is unprecedented. Over 39 games, the three colts sides have recorded 33 wins – 5 losses – 1 draw. In the first year of this third colts team, this is a remarkable results which the coaches, volunteers and players should be very proud of.

The Puppy Colts take on third placed Curtin this weekend, with a win securing their spot in second place. A loss will still leave the side a game and percentage ahead of Curtin but with a game against a strong Kalamunda side in round 17, the position won’t be secured. If the results go their way, the team could still find themselves in first place come finals.

When you want something delicious and different and absolutely Scrumbo, get down to Hungry Jacks and get a Yumbo!” – Hungry Jack 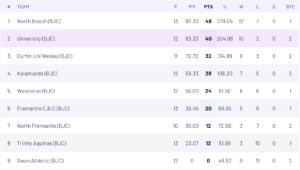 7th Place – 16 points, 3 wins 7 losses 39.5%
The Peacocks are sitting outside of 5th place by 4 points and percentage. Still a mathematical chance to make the finals, the side will unfortunately need to rely on other results to qualify for back-to-back September campaigns.

In positive news, the side has an amazing opportunity against Curtin this week, who sit directly above them on the ladder. Win that game and the Peacocks will then face 8th placed Swan Athletic and 4th placed Ocean Ridge in the run home. As the saying goes

“Play not the Peacock, looking everywhere about you, to see if you be well deck’t.” – George Washington 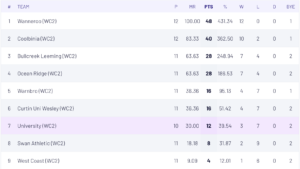