As we come to the mid-point of the season, all grades are confident of qualifying for finals with our quest for 9 more flags well and truly alive. There are three undefeated sides (A-Colts, Dingoes & BJ Colts), with all grades hoping for some consistency leading in to the colder months.

With a league-wide bye for the long-weekend, we have had a look at how each grade is tracking and what we can expect in the second half of the season. The next test for the A-Grade will come next week against the winless North Fremantle in a must-win clash for the side. We encourage all Uni supporters to get down to the game, with a Can Bar and Sausage Sizzle planned to keep the spirits high on what promises to be a Glorious day for Amateur Football.

The A-Grade side have made it through a difficult run of injuries and Covid Protocols to sit 3-5 leading in to the mid-point season. After a perfect 2-0 start, the side lost 5 games on the trot, including close matches against Kingsway, Scarborough and Bassendean. Against West Coast in round 8, the A-Grade side turned their fortunes around, recording a confidence-boosting win against the in-form A-Grade Newbies.

Next week, a game against the winless North Fremantle is an opportunity to get the side up to 4-5, keeping finals in reach as we move in to the winter months.

The Stormers are sitting comfortably in the top five at 4-3 with a healthy percentage.  The highlight for the Stormers has to be the dominant win against third placed North Beach under lights during the Neil Donaldson Memorial Round. This game showed that the girls can compete against the best in the competition and with the worst of the Covid impact behind us, it will be excited to see the team continue to improve. Next week, the Stormers take on West Coast in the Best of the West cup, a fantastic opportunity to improve their ledger leading in to the mid-season point.

The perennial leaders of the Womens grade in Curtin Uni look like the team to beat again, with Warnbro, Rossmoyne and North Beach nipping at their heels.

The Poodles have had a disappointing start to the season, with an even 4-4 record reflecting how competitive the grade is again this year. After an after the siren thriller in round 1, the Ressies have struggled with consistency as injuries and Covid wreaked havoc on the side, resulting in a revolving door of personnel.

Despite this, the group have bonded in recent weeks with a focus from Head Poodle Trainer Lou to bring effort and waggling tails to every contest. The turnaround in fortunes has been linked to a lock-in session orchestrated by Chris Ninkov, but this session also resulted in a Covid outbreak so may not be replicated any time soon.

The Ressies side take on North Fremantle and CBC in the next two weeks which will give a clear indication of the sides position in the pack. The team know they can compete with the top sides after getting within a goal of the league leaders Scarborough on their home deck. 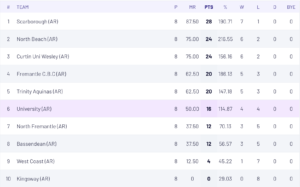 The Show Time Colts are undefeated so far this season, with their only blemish coming in the form of a last-gasp draw against second placed Curtin back in round 4. Outside of this game, the A-Colts have shown they are the team to beat, with no team getting within 20 points of the ladder leaders. This remarkable run of form comes despite a number of eligible players taking the step up to the A-Grade side throughout the year so far. As we head in to the Uni holidays and European Summer, the colters will be looking to get through the next 6 weeks unscathed before making a genuine push for finals come September. 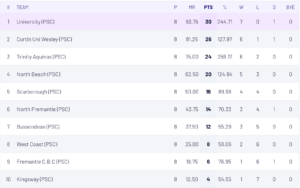 The new-look pirates are starting to mesh together under the watchful eyes of Ari and LP in the C4 grade. With only a handful of players rolling over from season 2021, the coaches have pulled together a group of misfits from the now defunct 5ths (Mutts), former colts and some returning club favourites in Vel and Monkey. Eight rounds in to the year, the boys are starting to find their sea legs and look like a side that will play a big part in the finals.

Back to back losses to the ladder leaders has shown that there is still work to do but the Pirates will be all-hands on deck against a competitive North Fremantle team next weekend.

This pack of Dingoes are riding high on one of the great undefeated streaks, not seen in this grade for a few years at least! Off the back of the leadership of Hardnosed Blake ‘Buckets’ Barrow, the team have conquered all in the incredible run of form. The highlight of the year has to be Big Al’s 100th game in Round One, where he had 5 goals and 35 contested possessions (allegedly).

Next Week the Dingoes will take a guided bus tour down to North Fremantle where the boys will be celebrating Erk-Dogs record breaking game / 30th Birthday and enjoying a few pints off the wood.

Due to a record number of Colt registrations prior to the season, Uni were granted a license for a third colts team for the first time in league history – In the Laurie Keene Grade. After a few rounds, it became clear that the newly formed third team were placed in a more difficult grade to the existing Brett Jones Colts. The club made the unprecedented decision to swap the grade of the colts after round 4. The order of the colts grades are now as follows:
1. Phil Scott (A-Colts)
2. Laurie Keene (Gulls)
3. Brett Jones (Puppy Colts)

The Gulls are sitting in fourth place, a game behind the top spot and with a comfortable percentage. The side will be looking to settle in to the Laurie Keene competition and see where they sit with a huge clash coming up in a few weeks against the undefeated Mosman Park. 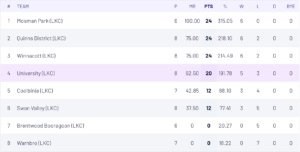 As mentioned, the Brett Jones colts have swapped grades in recent weeks but despite this, are sitting on top of the pack undefeated. The Gulls were dominating before the change, outclassing the competition in some thumping wins. Since the change, the Puppy Colts have shown that they are well suited to this grade with the most notable win coming against third placed Curtin. The boys will be taking on North Fremantle next week with the real test set to come in Round 11 when they take on second placed North Beach at the Taj Mahal. 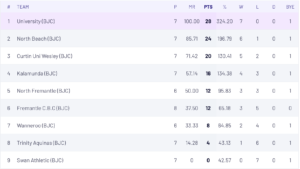 The Peacocks have been one of the hardest-hit teams this year with the Women having over 20 girls isolating with Covid at one stage. This meant that the girls had to forfeit a game in Round 2. Despite this, the Peacocks are only a game outside of the top five and will be confident of banking a few wins in the run home. The Peacocks will be taking on West Coast next week in a must-win clash. 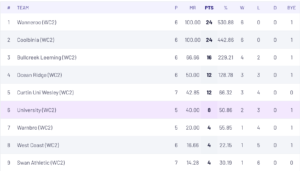