The club celebrated the life of Neil Donaldson with some great performances on and off the field. All grades wore black armbands and awarded a Neil Donaldson medal to the player that played in the spirit of the club legend. Across the grounds, we saw some special performances including 10 goals from Smally in the Pirates and an astounding 12.6 from Bray Lyon in the colts.

The day culminated in a night game for the A-Grade Women Stormers, a team that Neil helped to create and foster over the years. The Stormers put on a sterling performance in front of a big crowd, defeating North Beach in a heavily contested wet game. It was fantastic to see the past players, friends and family in the can bar cheering on the girls. After the game, everyone let their hair down, dancing to the live band and sharing Neil stories late into the night.

Thanks to all the sponsors that donated prizes for the fundraising raffle:

The Ressies suffered another narrow loss, this week at the hands of an in-form Scarborough outfit.

The signs were good early, with a perfect clearance and spot up kick to Sam Garstone in his return game unfolding in the opening seconds of the game. While Uni dominated the start of the quarter, Scarborough kicked four goals in the blink of an eye to end the term.

The remainder of the game was largely an arm wrestle, with Uni controlling the game for long periods of play. Unfortunately, we failed to make the most of our opportunities and were unable to run out the game strongly, despite wrangling a lead at one point in the third term.

Aden Wilkins was the deserving recipient of the Neil Donaldson Medal. Rocket used the ball well all day from half back and was strong in the aerial contest.

The Ressies comp is proving to be extremely even, and the group is looking to get back on the winners board next week.

The A colts took the short trip down to Millington Reserve on Saturday off the back of an awesome week on the track, highlighted by Baggy Short Thursday, in which small forward Jack Rava won the prize with his shin length denim shorts with a belt.

The first quarter, which has been the weakest part of our game, saw Scarborough jump out to an early lead. However through the terrific defensive efforts of Jack Kapinkoff and Nic Paganin in particular we were able to steady the ship, while through the midfield Charlie C-J won a heap of the ball and gave great service to our forwards.

As the game went on Scarborough started to tire and the run of our midfield took control as we seemed to win every contested ball and clearance thanks to ruckman West Love and all of the avengers in the middle.

Another part of our game we need to work on also started to make its way into this one, with our inaccurate shots on goal seeming to give Scarborough a sniff as the lead never blew out over 7 goals. At the end of the day though it was a comfortable win, but we still have a couple things to work on as we are not perfect.

The Pirates continued their strong form with a resounding 117 point win against Armadale this week. Captain Smallwood promised that he would kick a big bag and delivered with a mighty 10 goal effort and was rewarded with the Neil Donaldson medal. The boys dominated through the middle with slick ball movement and multiple handball chains resulting in many highlight goals. Vel was unfortunately charted off to hospital again with another case of leather poisoning with Monkey being closely monitored as well.

Austin Bennington played his first game in a few years in a return from an ACL tear and provided one of the highlights of the day after he was swung forward late and kicked a goal on the siren with the boys getting around him. Another highlight of the day saw a Tom Beresford kick that sailed straight through the big sticks called a point with Brez only realising after his traditional double cobra + flexing to the crowd celebrations.

A great 4 quarter effort saw strong contributions from many. The pirates now sit in 4th place as one of four teams with a record of 5-1 and have a good test against a strong Noranda outfit next week.

For round 6, the Dingoes found themselves up against Armadale for their third home game in as many weeks, with some huge ins – in the form of Hollywood and Catta.

Armadale started the game with a lot more determination than their ladder position would suggest, providing a good contest heading into half time. The dingoes kept their cool however, sticking to their game plan and, on the back of 7 goals from Hollywood and a captains performance from Big Al, launched into celebrations for Erk Dogs 30th as 61 point victors-continuing a run of 6 straight wins to start the season!

Saturday saw the debut of the Yumbo pups in the more suited Brett Jones Colts, up against none other than the undefeated Curtin Uni Wesley on the mighty MCG1. With the significance of Neil Donaldson round, the boys were pumped up to make their mark on the competition right from the first bounce. To further add to the spectacle, people from all around seemed to have heard such a clash of the titan’s affair, as a crowd in the thousands flocked to the ground (allegedly of course) creating an electric atmosphere by bounce down.

The first half began with total control from the home side as the Uni midfield took over, with Tmax and Gravy running the Curtin wingers off their feet. Just as important in such early dominance were debuting young bull Reidy and high-flying half forward Cooky with their brand of old-fashioned crash and bash footy proving too difficult to match for the opposition. Despite efficiency in front of goal from key big man Smokin Joe and the crumbing prowess of Doogs and Scully, the Pups came into halftime only three goals in front as Curtin had managed to score against the flow numerous times.

The third began with yet another hot start for the Pup’s that maintained the quarter as Curtin were time and time again denied forward entry’s by superb defensive efforts from Will Foster who was playing like a man possessed. As Jun and Cooky combined for a terrific finish on the run that extended the Uni lead out to 4 goals, the siren sounded for the final break. Unfortunately for Uni the first contest of the last quarter saw skilful forward and club debutant, Matthew Sculthorpe, go down with an ugly knee injury that saw him sidelined for the remainder of the game. This, along with the strong wind that picked up in favour of Curtin Wesley’s scoring direction, had turned the tables in the oppositions favour as Curtin’s Mids rose to the occasion and began to dictate the flow of the game.

Repeat deep entries into Curtin’s forward 50 put tremendous pressure on Uni’s defence, though Foster, Weeks and Brown were up to the task as they worked tirelessly to limit the scoring as Curtin piled on late goals and were looking as if they were ready to run over the top of the home side. The final minute saw Pups debutant and well-known club Roo Adam Prowse with ball in hand deep in defence, as he carefully hit a teammate 65 meters away, on his opposite, under heavy pressure to ice any chances of a last gasp Curtin goal to tie.

It was a tremendous win from the Yumbo Pups as Will Foster was awarded the Neil Donaldson Medal for best on ground. The Pups look onto playing Swan Athletic next week to maintain the undefeated streak of 5-0. 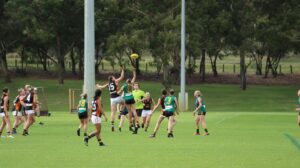