After an extended Easter break, Round 3 returned some mixed results with a combination of injuries, Covid and Melbourne trips causing implications at the selection table.

The A-stream hosted Curtin Wesley, with a thrilling draw in the A-colts followed  by valiant losses in the undermanned League and Reserves games.

The Women returned for round 2, with a tough loss to Warnbro for the Stormers. Unfortunately the  Peacocks were not able to name a side and forfeited their game.

Despite the challenges in selection for the lower grades (And missing head coaches, off surfing down south), the Pirates and Dingoes held on at the Shoebox in tight wins against the odds.

In the colts, the C-Gulls enjoyed a big win while the Yumbo colts went down in a promising performance for the young lads.

Next week, The A-stream head down to Bill Grayden to take on TA’s while the lower grades are at home.

The league side had a very interesting lead up to the game with COVID ripping through the club this week. We lost key contributors such as captain Tim O’Hara and Jye Harris down back, Nick Winmar and Finn Moloney in the midfield, plus Troy Culloton and Sam Garstone in the forward line. The number of outs granted us the opportunity to blood some youth. We had 3 A Colts members from last year make their league debut in Tom Lawson, Jack Mentink and Tim Hogan. Including ex Swan Districts forward (and Nate Blakely’s best mate) Leigh Kohlmann.

The coaching group echoed the sentiments of the first couple of rounds, “why not?”. Despite being depleted, we maintained optimism that our brand of football can match it on the day.

We started the first half with some inconsistent play as the polish of Wesley hurt us on the counter attack, making the most of their opportunities in front of goal. We went into the half time break down by 4 goals, which is not dissimilar to the position we found ourselves in against CBC Fremantle in round 1. The boys came out after half time with fight and determination, but unfortunately we couldn’t cut into the lead and it remained roughly 4 goals at ¾ time.

The last quarter was disappointing as Wesley kicked 6 goals to our 1 as the team ran out of legs. Quinn Donaldson and Sam West competed valiantly across the afternoon with larger roles in the midfield, but we didn’t play to our standard for long enough to compete with Wesley for all four quarters.

The Reserves have gone down by 42 points in a valiant effort against the reigning premiers Wesley-Curtin at MCG1. The lead-up into the game was an unusual one with a significant amount of Covid cases impacting availability across all the grades at the club.

Accordingly, some new and old faces were asked to pull on the green and blue. Out of semi-retirement Ricey found his boots once again, with Benny Ledger making his debut for the club sparking a festival of friendship on the opposite wing to his best mate Morf (who was doubling up on the day).

The Coaches just emphasised competing against this strong Wesley Curtin side and making them earn everything on the day. A couple early goals from the Tigers was the source of some early anxiety but the backline steadfastly held on led by the Frenchman who is currently in the middle of a renaissance. A couple goals from Cruddy and Harry Dowling (also doubling up on the day) kept Uni within 3 goals going into the first break.

What followed was arguably the Reserves best quarter of the year, with the midfield group starting to take the ascendency. Pat Don was outstanding in the ruck providing first usage, with young Josh Davies, Denty, Ollie O and Sauce also starting to take control. Harry Dowl added another, and Pat Don kicked one from the same spot he did 3 weeks to bring the margin back to single digits. Wesley kicked one with 10 seconds left in the quarter to extend it back out to 3 goals.

Out of half time Wesley to their credit came out with strong third and fourth quarters. Of note from the half the Macedonian Marvel kicked a couple; Ollie O accumulated a bucket load, Ledge proved damaging in whatever position he was playing in, and Lowey saved 3 goals by filling the role of a goalkeeper that would have Gianluigi Buffon blushing.

Overall, the result, whilst not the outcome we were hoping for was gallant all things considered. The efforts shown by the boys was unquestionable and provides much optimism as we move forward into the next few weeks. This week we have a trip to the Shoebox to clash with TAs in what is shaping up as an important game early, but I have no doubts that if we can bring those same efforts shown by the group on Saturday, particularly that in the second quarter, we can come away with a W. 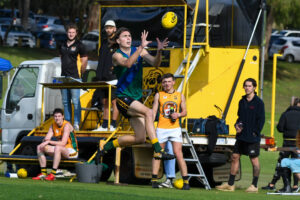 The A Colts along with the rest of the club came into Saturday with lingering covid issues with plenty of changes made to the team sheet in the 24 hours before bouncedown, most notably Harry Stead registering for Gibson in Esperance instead of University, well done Harry.

We started the game off slowly and looked second to the ball at most instances against a fired up Curtin side, but as the game went on we started to claw back the deficit and went into Half time 2 goals down.

The second half saw a tactical masterstroke from caretaker assistant coach Jake Colvin with moving prominent midfielder and debutante (and former state 18s player) Oscar Armstrong as a spare back, which saw our ball movement and attack off half back create all our play. Unfortunately it was too little too late as we had many chances in the second half to gain a lead, as it ended in a draw 38-38. 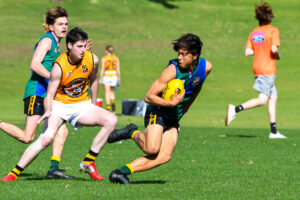 Coming off a close loss to North Beach before the Easter break, the Pirates were looking to bounce back with a win against an undefeated Trinity Aquinas side on the weekend. While we were forced to make 12 changes to the side, this gave opportunities to Dawso, Robbo, Jmo, Bilf, Foz, Cuz and Roz for their first games in the Pirates in 2022. Andy Diamond also lasted just 2 games before agreeing to come out of retirement and give the boys a hand.

Despite the significant changes to the team, we were confident we had the talent to match Trinity Aquinas. Similarly to previous rounds, the message from the coaching group was to play with freedom and take the game on, and that’s exactly what the boys did. We managed to kick 6 goals to 2 in the 1st quarter and held off a strong response from Trinity Aquinas in the 2nd to lead by 10 points at the main break. In the second half, the boys rallied together to hold off a late push by Trinity Aquinas, to win by 3 points with just 1 player on the bench. This was certainly one of the more memorable wins I’ve been a part of at UFC and will hopefully galvanise the group for the remainder of the season.

The Stand-in skipper Scooter Morris and the midfield of Dano, Cuz, Henchman and Powelly put in a superb effort all day, winning most of the clearances against a significantly more experienced and bigger bodied midfield. Demon marked everything that came his way playing out of the square and kicked a huge bag of 7, while Justy and Bez were excellent again kicking 3 between them. Jmo won several crucial one-on-ones for us at full back, and Dawso and Screech provided the run we needed off half-back.

After a mixed bag of results in the first two rounds, the Yumbo colts hosted the challenge that was a fit and firing Winnacott side on the hallowed turf of MCG2. With injury and Covid running through the lower grades we were once again full of changes in our line-up, however the key figures in Pepper, Malone and Coutts stood to give university their best chance to grab the four points.

After a spirited rev-up from none other than the great Chris Ninkov, the first quarter was a clinical brand of crash and bash football with both sides eager to maintain any sort of control of the play, with both sides slotting 2 majors at the first break.

Winnacott jumped out of the gates in the second and seemed to gain total control of the play despite the superb defensive efforts from Peps and Fossil. Winnacott’s repeat transitions from coast to coast showed their class and resulted in a 3 goal Winnacott lead heading into the main break.

With an emphasis on playing a tough pressure and tackling driven style of play the Yumbos returned in the premiership quarter with an excellent early crumbing goal from Hodgey that set the tone for the remainder of the quarter with Pago, Wookie and skipper Doogs stepping up time and time again to regain momentum and close the margin to a 2 goal lead,  until a number of skill errors in University’s defensive fifty ultimately costing them a number of late goals and further extended Winnacott’s lead out to 4 goals at the final change.

Impressive efforts from a smooth moving Sanga down back and the crash and bash of Moz in the guts were pleasing for the coaching group, as Uni ultimately got put in the rear-view mirror in the last by a fierce and relentless opposition. With outstanding improvement over the first three rounds we look to take on Mosman Park next week.